ExxonMobil Corp., the largest producer of oil in the United States, is testing a program whereby excess natural gas from North Dakota’s oil wells would instead be used for mining Proof-of-Work cryptocurrencies. The pilot program is being conducted in collaboration with Crusoe Energy Systems, Inc.

In a pilot program with Crusoe Energy Systems Inc., ExxonMobil is using natural gas that would otherwise be burned off and wasted as energy to power cryptocurrency mining rigs . The information is apparently not supposed to be public, said the anonymous sources. While this would not be considered clean or green Bitcoin mining, it would be utilizing resources that otherwise would have been wasted. Launched in January 2021, the pilot project has used 18 million cubic feet of gas on a monthly basis. This is apparently due to an insufficient number of pipelines and pressure vessels. The process consists of utilizing natural gas from a Bakken shale basin oil well for the operation of on-site mobile generators. These mobile generators host Bitcoin mining servers. The sources suggest that similar pilot projects are being considered in Alaska, Nigeria, Argentina, Germany and Guyana.

Alternative Use of Natural Gas? 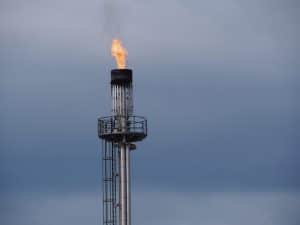 The news comes after another major oil company, ConocoPhillips (COP), said it’s running its own pilot project to route excess natural gas from one of its Bakken region projects in North Dakota to supply necessary power for a bitcoin (BTC) mining operation. Similar to ConocoPhillips’ mining scheme in North Dakota’s Bakken region, Exxon is using mining plant and equipment to divert natural gas that would otherwise be burned off into generators, which convert the gas into electricity used to power shipping containers full of thousands of bitcoin miners. Exxon launched the pilot in late January 2021 and expanded its buildout in July. The problem Exxon and Conoco are addressing has existed for years: What happens when drillers accidentally hit a natural gas formation? Ordinarily, gas leaks are subject to greater regulation and scrutiny are burned off as gas flares—the curious jets of flame that illuminate oil fields. But Exxon, like many other oil producers, has pledged to eliminate “routine gas flaring” by 2030, to reduce carbon dioxide and other greenhouse gas emissions. Unlike oil, which can be trucked out to a remote destination, gas delivery requires a pipeline. If a drilling site is close to a pipeline, producers can sell it right away. But if the pipe is full or if the gas is 20 miles away, drillers often burn it off. That’s why you typically see flames rising from oil fields. In addition to the environmental hazards, drillers are also burning cash. 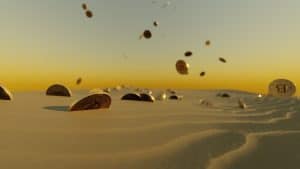 Enter bitcoin mining, which only requires an internet connection and can be done from anywhere. And because miners’ primary variable cost is energy, they’re incentivized to find the cheapest sources of power. Oil and gas producers are increasingly under pressure from regulators and investors to reduce their carbon footprint to help combat climate change. That includes reducing the amount of gas they flare. At the same time, there is a rush of miners trying to use cheap gas in oil producing fields to fuel their operations. The gas is still burned, releasing carbon dioxide into the atmosphere, but the energy is put to use instead of simply being wasted. Shale oil produces so much excess gas that it ends up being vented into the air or burned off. Natural gas is comprised mostly of methane, a global warming agent that is more than 80 times more powerful than carbon dioxide during its first two decades in the atmosphere. North Dakota, Colorado and Wyoming are among the first places to use crypto mining to slash methane emissions.